Cats can have strong bonds with one another. Owners wanting another pet need to consider between introducing a new kitten or an older cat. However it is often a more successful endeavor if the cat you bring home is a kitten. There is always an abundance of kittens in the shelters to choose from. In the first place, consider the temperament of your resident cat. If she is shy and reserved, you should not choose a dominant, outgoing kitten. Likewise, if your cat has a strong, alpha personality, you should not be introducing a new kitten that is timid by nature. 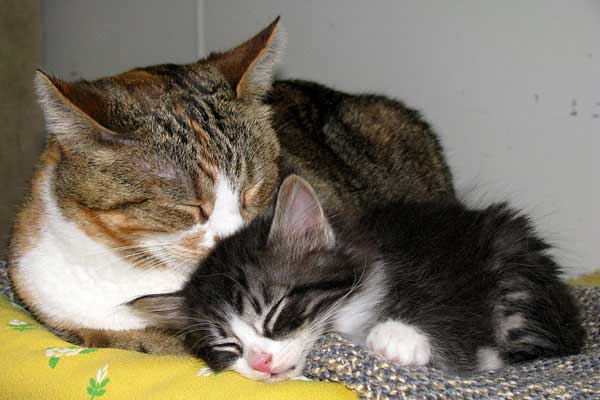 Matters for consideration when introducing a new kitten

The wild ancestors of modern domestic cats were largely solitary animals and as such, intensely territorial. Our kitties can be territorial too. In introducing your new kitten, keep in mind the need for space that both of them have. Improper socialization between cats is a primary cause of surrendering adopted kittens back to the shelter. Don’t be one of those people. Start off on the right foot and take it slowly.

Cats communicate with each other through body language but even more through scent. They rub their faces and scratch things to leave behind pheromones. These are their calling cards.

You can’t just “throw him in and see if he swims” so to speak. The introduction process is going to take some time and the kitten and cat will need to be separated at first. Your resident cat should retain the same access to areas in the home that she inhabited before the kitten’s arrival. In preparation for bringing the new addition home, you should create a safe place for him. Ideally the extra bedroom or office or the laundry room. Any room with a door. He should have a cozy place to sleep, a hiding area, and of course his food and water bowls and litter box. Make sure to keep the food and water bowls and the litter box far apart as cats do not like to eat near their litter box.

Gradual introduction is key to building a positive relationship between your resident cat and the newcomer. Upon bringing your new kitten home, you should go directly to his sanctuary room. Get inside and close the door. Hopefully, he is in a cat carrier. Set the carrier down. Place whatever you are using as his hiding place, (an upside down box with entrance holes cut into it or some sort of little tent) and place it in the corner next to the carrier you have brought him home in, away from the litter box. Open the door to the carrier, but don’t force him to come out. 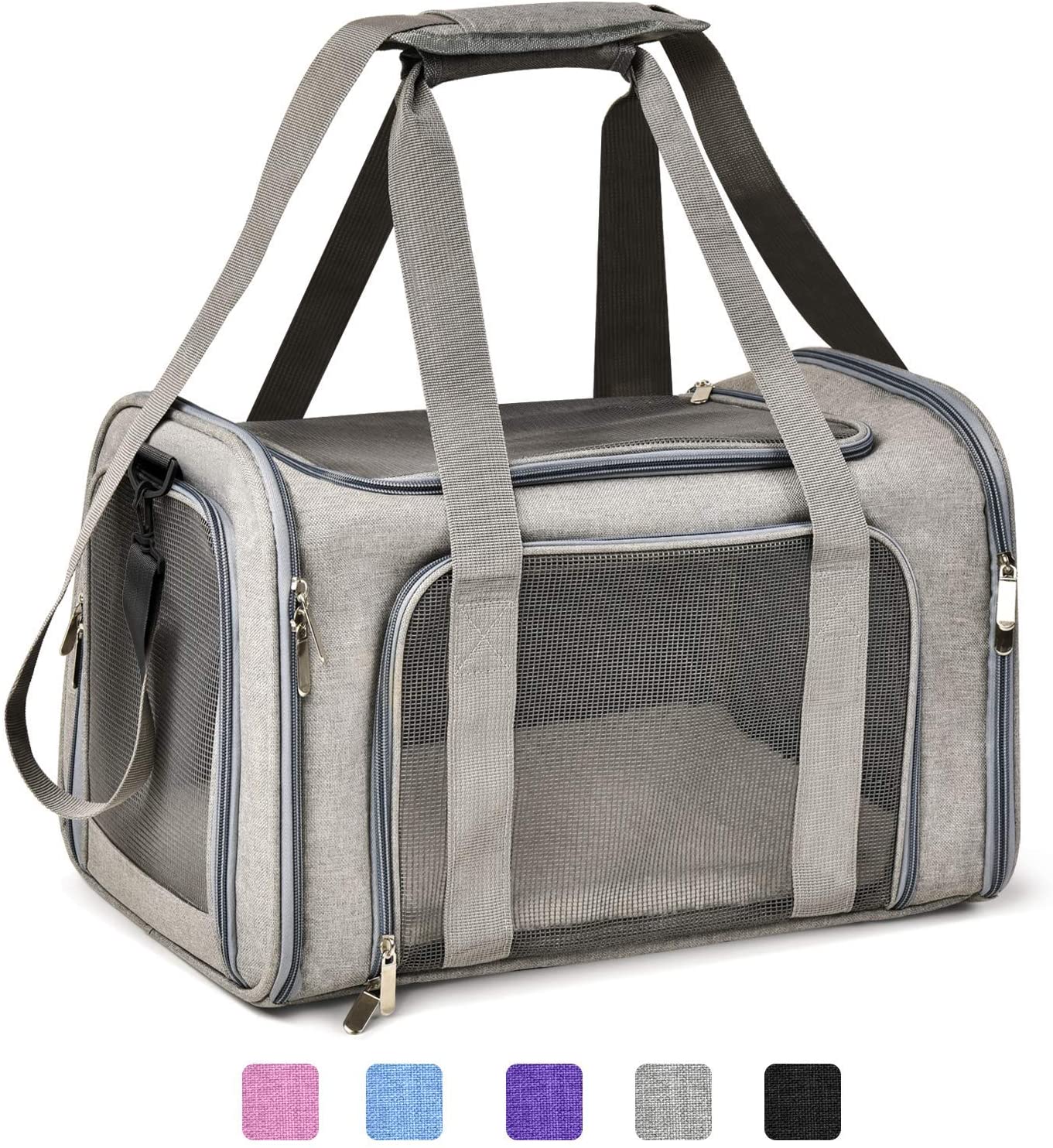 He has been through quite an ordeal already. He may have been separated from his litter mates or other kittens he has bonded with at the shelter, the ride home may have been stressful for him and you are new to him as well. Now leave the kitten alone in the room for a while. Allow him some time to calm down and he will likely come out of the carrier on his own. Leave a t-shirt with your scent on it near the place where he will sleep. You have provided him with food, water, a litter box and a safe, cozy place to sleep. He probably already likes you and a cloth with your scent on it will bring him comfort when he is alone and help to solidify your new bond.

The first few days should center around scent swapping. Take the t-shirt with your scent and the scent of the new kitten and place it near your resident cat’s food dish or a favorite resting place. If she hisses right away move it back a little, but leave it nearby. Her curiosity may get the best of her, she may go to check it out and rub her scent on it. This is the beginning of her getting accustomed to the new kitten. Do something similar with something that has the scent of your resident cat on it. Introduce it to the new kitten. 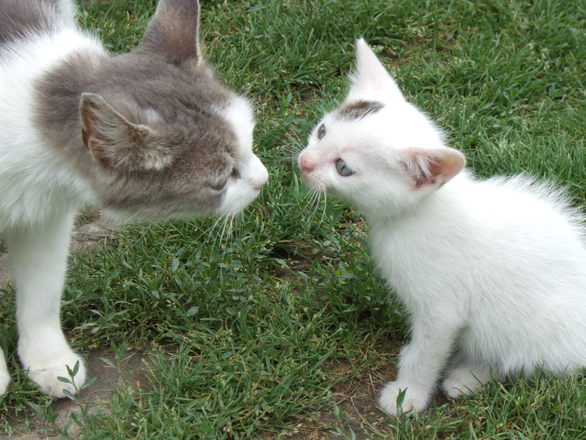 The next big step is to swap food bowls. The idea is to make both cats associate the scent of the other cat with the very pleasurable activity of eating.

The next thing to do is very pleasurable for you. Cuddle each of them separately, nuzzling and rubbing their faces, making sure to rub their cheeks and get their “friendly” hormone on you. Go from your resident cat to your kitten, in that order and back again. They will smell each other on you and now you are building a social bond between the three of you.

Your cat is aware of the new kitten’s presence and vice versa. Now you can begin the process of visual acquaintance. You should figure out a way to wedge the door of your kitten’s sanctuary room just wide enough that they can see each other, touch noses and sniff each other. They should not be able to get to each other through the opening. This is just the introductory phase. Encourage the cat and kitten to spend time together at the opening with treats and toys that they can swap off playing with, something like a wand with a feather or something dangling from it. You should be interacting with the two of them. If there is aggression, make the space between them smaller and start setting down their food dishes on each side of the door, at first across the room and slowly closer and closer to the door on both sides. When the cat and kitten eventually show signs of play and sniffing and interest in each other, you can attempt one on one contact. 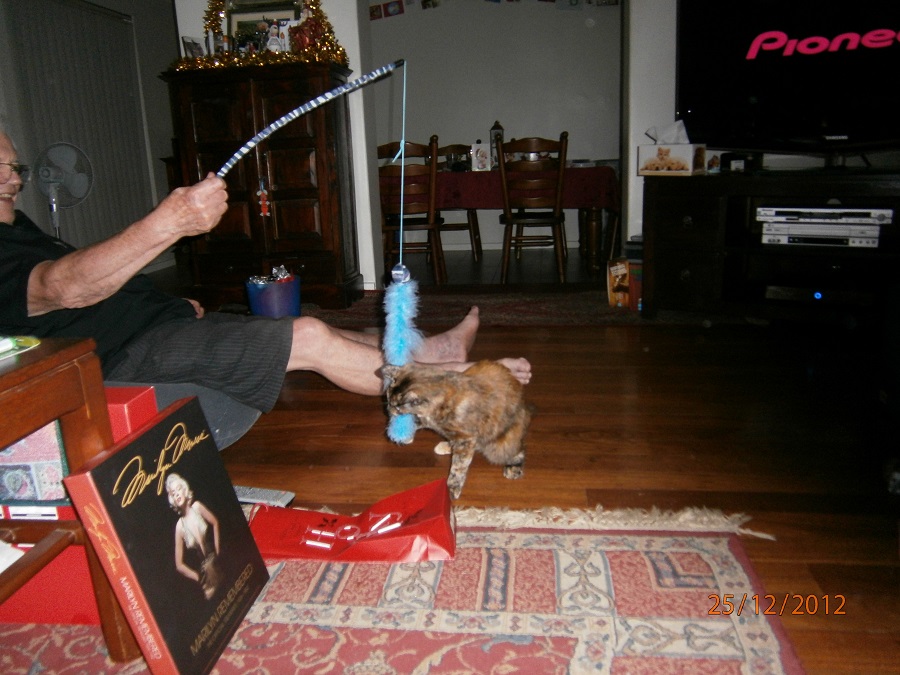 Time to open the door. They may just move around and explore each other’s territory. They may come up for a closer look and a sniff. Keep something in hand to cause a distraction if there is the first sign of hostility or aggression. A toy with a jingly bell inside or something small that makes a small noise tossed on the floor can quell a spat. They may retreat to their separate corners and regroup. They may spend the day ignoring each other. Do not try to force interaction between the two of them. Cats sometimes need space. Give them escape options. A cat tree or an escape route under the sofa. They need to jump up, or down or just get away any way they can. They are curious by nature. That curiosity will get the best of them sooner or later and that will probably be the beginning of a great relationship between them.

Your cats may spend their lives very close. Grooming sleeping and playing with each other. They may show little interest in one another, but they are still watching each other. There is still something of interest that makes their lives less boring. If your cats are very close and cozy, they might not mind sharing a litter box or even a water bowl. Food should always be prepared in separate dishes. Cats are creatures of habit and generally prefer their own food dish. Oddly, it seems as though they can tell which dish belongs to them. Maybe not. 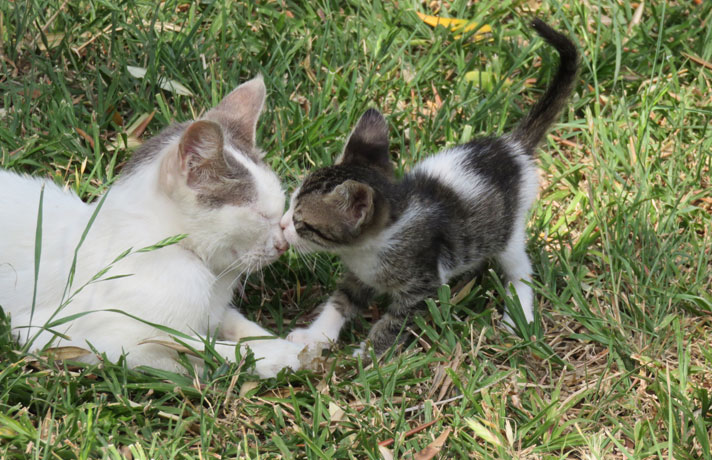 As to sleeping and lounging preferences, closely bonded cats may share the same bed and lounge together on the sofa all day. If your cats are not so close, provide them with their own beds, hiding areas, perches and litter boxes.

As we’ve mentioned, cats communicate through subtle and not so subtle body language. Aggression in cats can begin with a steady glare and escalate into swatting and obstructing passage from place to place in the house for the bullied cat. This cat may respond with body language of his own. He may respond with aggression of his own, such as hissing and flattened ears. Or he may retreat by flattening his body as much as he can and slinking away. If bullying becomes a common occurrence, make sure the bullied cat always has a place where he feels safe that he can get away to when aggression is pointed at him. Try to keep pathways for both of them to navigate and still avoid each other. 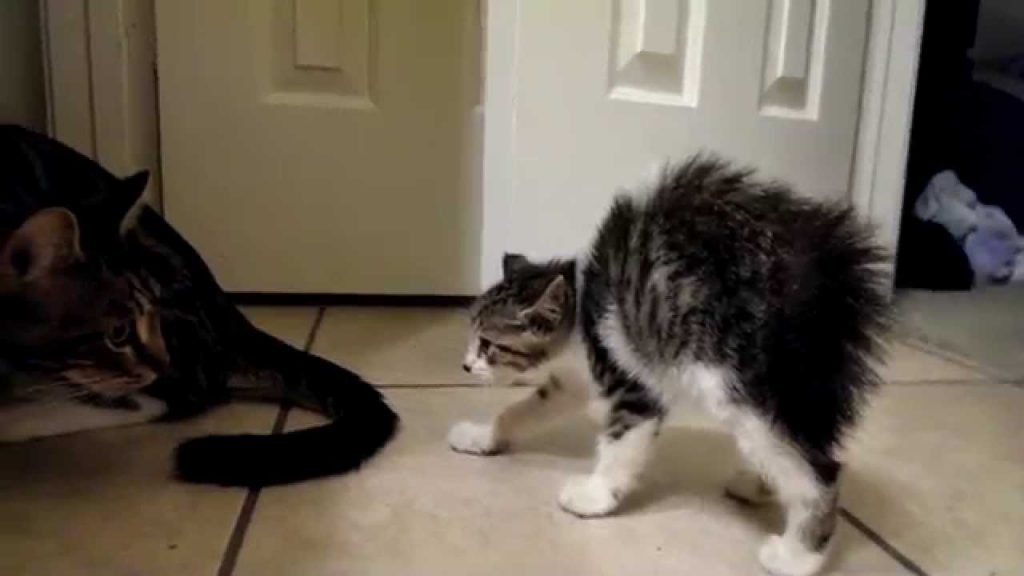 It is pointless to try to punish a cat. It is never effective, can alienate your cat from you and can cause discord in the house, even worse than the bullying that might make you want to punish in the first place.

Unwanted behaviors like spraying and eliminating outside the litter box can be stress related. In extreme cases of bullying, if it is something that didn’t happen in the early days but is a relatively new occurrence, there may be factors that you have not considered. There may be a health issue in one of them that is not apparent to you. Keep a closer eye on them to watch for symptoms. This may not be the problem. Each cat is unique, just like us. We fall in and out of love with each other and some of our friendships don’t last. Your cats may have simply lost interest in each other.

Love and respect your cats for the individuals they are. Hopefully, they can have a meaningful bond with one another. At the very least, you will have twice as many cats to love and they will have a distraction from boredom.

17 thoughts on “Introducing a new kitten to your older cat. A do’s and don’ts owners guide”