Tortoiseshell cats are amazing companions; they are known for their beautiful colors, unique characteristics, and lovable personalities. They got their name from their bi-colored coats that resemble a tortoiseshell.

They are like human in many ways. They tend to get jealous if they see you cuddling other pets. That is perhaps why we bond so well with our Feline pals; they remind us of ourselves in a certain way. Are you are thinking of getting a cat and maybe wondering if a tortoiseshell cat is a good choice? Well, believe me, your life will full of fun if you choose tortoiseshell cats as your pets..

It is their patterns that attract so many potential owners. They come in many different colors and pattern; these cute cats have a lot of personalities, that you might find it as the right choice if you are not looking for a specific purebred breed, but instead want a unique kitty to share your life. In fact, there are many interesting things to know about these cats that I have compiled the following list; and hope these interesting facts will help you make the right choice.

1. Tortoiseshell is not a breed:

The unique characteristic of this cat is the patterned coat, not the breed. A tortoiseshell breed does not really exist. But, many breeds can display tortoiseshell markings, like American shorthair, Cornish Rex, British shorthair, Maine Coons, and Persian, and many others. While their coats are usually ginger and black, tortoiseshell can also have a hint of gold, cream, or orange. Their coat colors are either “bridled” or “patched”, which means the colors form big patches throughout the body.

4. They are predominantly female;

It’s in the genes: The chromosome related to coloring in cats is the X chromosome. Female tortoiseshells have two X chromosomes that carry the black and orange codes. The male is very unlikely to display the orange coat color. To complicate things further, female feline heterozygous exhibit a mixture of orange and black, are also known as tortoiseshell.

Since tortoiseshell cats belong to different breeds (and these may vary from one cat to another), their weight and lifespan vary. One of the oldest tortoiseshell cats was named Marzipan, lived to be 21 years old. Marzipan arrived as a kitten at the Astor Theater in Melbourne, Australia, where she became a favorite fixture. Her passing in 2013 from a “long illness” saddened Aussies.

The male tortoiseshell comes with XXY chromosomes, and are quite healthy in many ways. They can live a healthy and long life. But, the male tortoiseshell is sterile because of the abnormal pattern and number of genes in the cellular DNA. About 1 in 3000 male cats have this condition and their cells can undergo similar X-inactivation process as the female. XXY males are always sterile and are very rare.

7. Some Believe That Tortoiseshells are Mystical:

Tortoiseshells cats are not only considered as a good luck charm, but the Japanese culture also believes that they can ward off ghosts and evil spirits. In fact, the Japanese sometimes kept these cats on their boats to protect themselves while on the water. There is a long history of these cats being mentioned in folklore! 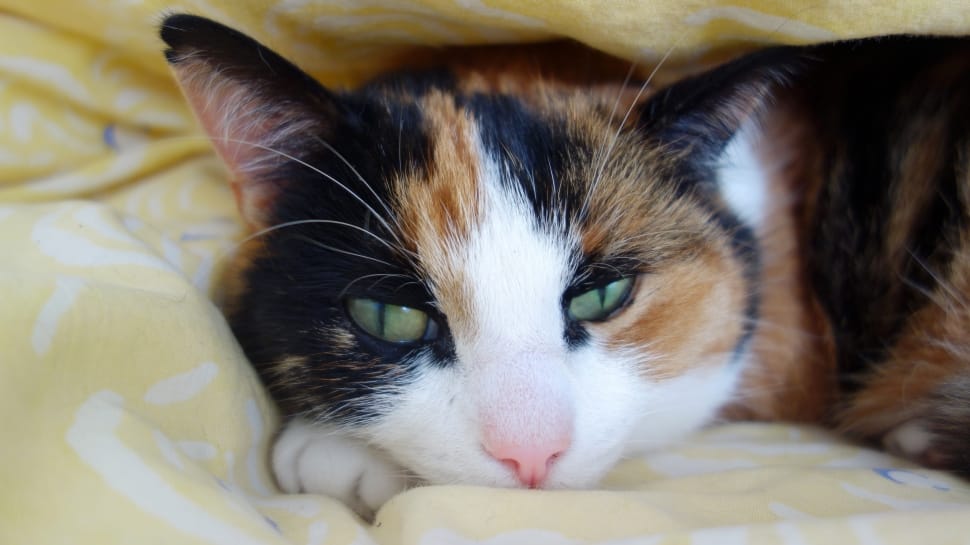 9. Tortoiseshell cat has a bad attitude:

It is believed that they have a bad attitude. This may have led to Japanese myths that tortoiseshell hunt ghosts. Nobody wants to believe that their feline pal is yowling and hissing at them, therefore they imagine that their cat annoying behavior is to scare away ghost. Tortoiseshells have been described as capricious, frisky and stubbornly independent. This may be one reason they don’t get on well with another male tomcat.

There is a belief by some people in Southeast Asia that the first tortoiseshell had a divine origin. That she came from the blood of a goddess born of a lotus flower. This is one of the favorite stories about the origins of tortoiseshell cats.

Yes! The white tortoiseshell or the calico cat is Maryland’s official cat. The cat became an official state cat on October 1, 2001. The cats share the same color pattern as the official bird of the state, oriole. Thus the Calico was the apparent choice.

12. Many see Tortoiseshells as a Love Charm:

Another myth about Tortoiseshells cats is that if you have a dream about tortoiseshell cat, you are predestined to be fortunate in love. Who knows? Perhaps it will work if you try!

13. Tortoiseshells can see the future:

One of the myths and my last in the list is the idea that tortoiseshells are able to see the future. Even better, they can transfer this gift to a child in the family. Although most of these myths may not be true, we don’t mind because we love our tortoiseshell cats.