What animal lover has not seen kittens at play and been enchanted by their antics. There seems to be a lot of cat to cat aggression involved but are your cats playing, or fighting?

Kittens play. They stalk, chase, pounce, tumble, swat and take turns being the “aggressor”. This is a natural, evolutionary habit passed down from their wild ancestors to learn to stalk and hunt prey. In domestic cats, it is also the way they learn to build social skills, physical strength and stamina, alertness and mental clarity. They test boundaries. They adopt dominant and submissive roles. Kittens dart across the furniture, seem to travel up the walls, they have FUN! Most adult cats that are raised together continue these behaviors, although not as amusingly as kittens. These adult cats are usually extremely affectionate with one another, groom each other and sleep curled up together. Sometimes, a new cat introduced into the home can be accepted into the fold. Cats that have been well socialized as kittens are more likely to accept a new addition.

Cats at play are quiet. There is no hissing or growling in cat to cat aggression, no loud meowing or yowling. Cats play is slow and graceful, like a ballet. Just as quickly it can become frenetic and silly. Cats need plenty of exercise to keep their muscles in shape and their reactions swift. They also need to be stimulated, not bored. Even at rest, cats can become affectionate and spend time grooming and cuddling. A little mouthing can turn into another round of play, hopping and jumping into the air. The grooming, resting together, playing, builds bonds of attachment and friendship in litter mates or cats that were raised together from kitten-hood. Older cats are often accepting of new kittens brought into the household, too. 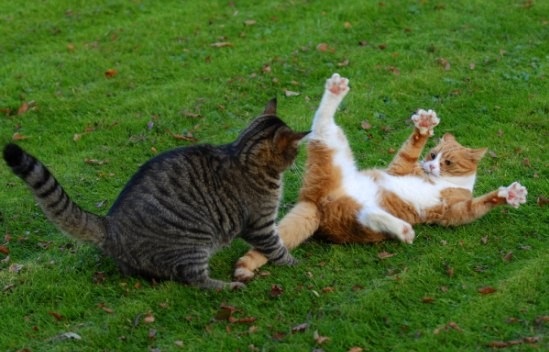 Playing entails stalking and sneaking up, pouncing, swatting with claws retracted. Cats execute ambush attacks, roll around, sometimes even test just how hard they can bite. The posture of a cat amenable to play is body leaning toward the “opponent”, not away. Ears forward, claws may or may not be out. Once in a while, play can get a little out of hand. When this happens, the cats may have a brief cat to cat aggression spat and retreat to their respective corners.

This kind of mild disagreement is nothing to worry about. A true cat fight is completely different. Heads get lowered, teeth are bared, there is a lot of hissing, growling, yowling. Tails twitch furiously, backs arch and ears are held out low, and horizontally on the head. At this point, you need to be the cool head in the room. You can clap your hands loudly and yell “No” or “Scatter” or any phrase that you will use consistently. Never jump into the fray. That will not end well for you!

There are easily spotted signs of true aggression. Aggressively stalking, chasing, pouncing, biting the scruff of the neck, yowling, hissing and meowing loudly all point to a problem in your cat family. It could be misread play action and one or the other will back away, while the victor, having won, has made his point and goes on his way too. But, the aggressor may go so far as to attempt to prevent access to food and water bowls and the litter box, perches and cat trees and toys. There are several reasons for fighting and aggression in house cats. Let’s look at a few.

This is a short lived problem. You may have a mother cat with kittens. As with all animal mothers, she will be extremely protective of her kittens and can be quite ferocious, even with you. Once the kittens have gone off to their new homes, this problem goes away. If a kitten or kittens stay on in the home, eventually the adult cats may change their attitude toward them and a little aggression may surface. This is the adult cats’ way of saying that it’s time to grow up. No more nonsense. Think of a pride of lions. At some point, the adolescent males are kicked out of the pride to go start their own lives. Your adult cats aren’t exactly “kicking them out of the pride”, it’s just that the dynamics of the relationship have changed. 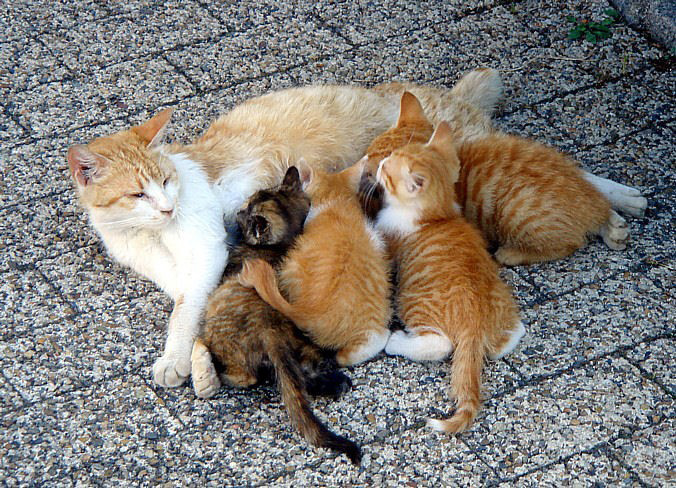 Have you ever seen your cat sitting in the window suddenly become agitated, restless, making unusual vocalizations and swatting at the glass? She has probably seen something outside that has disturbed her. A bird, a squirrel, another cat, intruding on her territory. Your cat may redirect that anger toward one of your other cats and attack. Two things happen at that moment, she is furious and acting out her aggression on the nearest target and the other cat is surprised and angered at the attack, because he hasn’t got a clue what is happening. This may turn into an ugly little brawl, but should not last long, once the adrenaline has come down.

Cats are defensive and secretive creatures by nature and hide illness and injury from those around them. They do not want to show weakness. The cat may fear an attack coming from another cat. She will crouch low, with tail and legs pulled up underneath herself, flatten her ears and may emit a low growl or yowl. Signs of poor health in a cat are; not eating and drinking, pooping and peeing outside the litter box, hiding, hunched over, aggression to other animals and people and yowling and meowing incessantly. Sudden onset of these behaviors merits a trip to the vet. 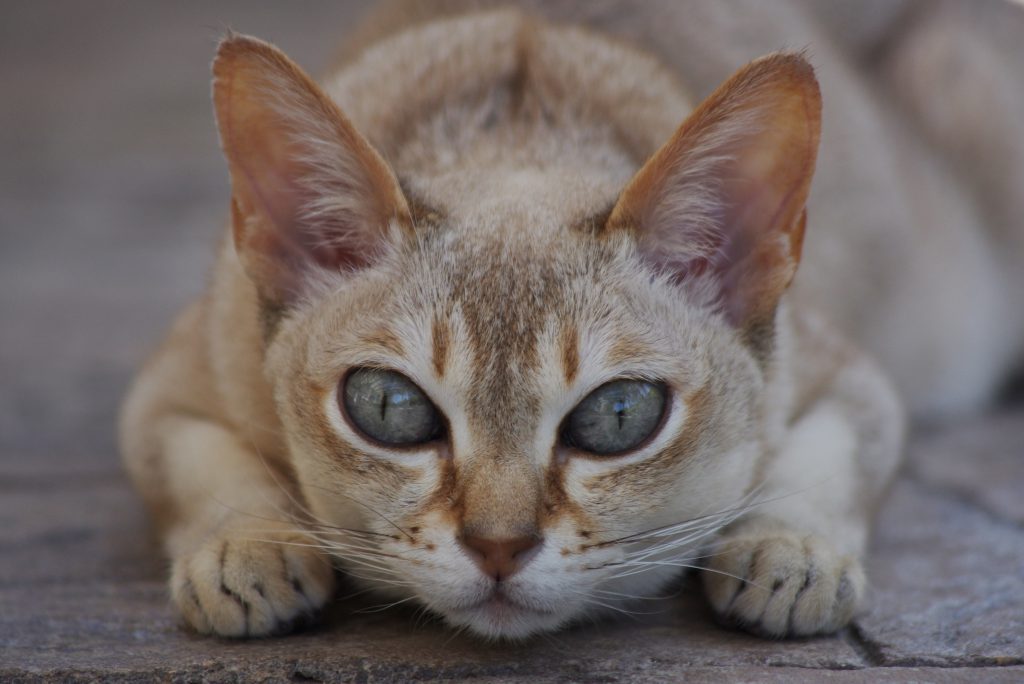 Forms of Aggression Due to Changes in The Home

Cats are creatures of habit and can be resistant to change. They are also territorial. Issues can arise when a new, adult cat is introduced into the home. This cat may be a perfectly gentle, friendly cat. But there may be things that an ordinary person wouldn’t notice, but a cat would and this can cause issues. The new cat may have come from a shelter or is fresh from the vet’s office. The scent from those places is nothing a cat enjoys.

They may not welcome the new cat simply because of his smell. Likewise, a new cat may not like his new digs. He may have been under-socialized, had unpleasant experiences early in life or the lack of pleasant experiences. You usually don’t know if the cat grew up alone. The introduction of a new cat can be extremely difficult if that cat has no feline social skills and interrupts the daily lives and routines of the resident cats.

Unforeseen Changes in Your Cats

As with people and other animals, as we age, our temperament changes. Two cats that have always gotten along in the past, may suddenly grow to dislike each other. This may lead to occasional to frequent spats. This does not mean “knock- down, drag out fights”, it just means they’ve grown apart and will probably avoid each other. There is nothing you can do about this. We spoke of kitten litters born in the home. There can be a couple of sources of discontent here. The male and female parents of the kittens are obviously not related (hopefully altered now) and they might not be as cozy as they once were. While other adult cats in the house may have warmed to the kittens, the parents may not accept them once they’re grown.

Adult female to female relationships and males to males also, are strained in unrelated cats. They can have a very rough time sharing space. Separating them as much as possible by providing separate feeding spots, individual water bowls and separate litter boxes helps. They must also get equal attention from you. Jealousy, or feelings of neglect can fuel dislike between the cats. If they are going to live essentially separate lives, they also need plenty of stimulation. Puzzle toys to keep them mentally sharp, toys like wands with feathers to keep them agile and engaged. They should also have their own private bed, in an out of the way spot, so that they can feel safe and secure.

Safety for You and Your Cats

In the event that a truly aggressive fight happens, the last thing you want to do is dive in to stop cats fighting by separating them. Cats are totally irrational and not in complete control of their actions while in the middle of a serious conflict or staring down another cat. Cat to cat aggression at its worst!

I had a personal experience of this and ended up in hospital on Christmas Eve a few years ago! After our guests had left our party I noticed our cat Leo outside eyeing another cat across the street. Whilst Leo wasn’t hissing at that cat his body was very  tense and I made a cardinal error of judgement in picking him up to avoid a potential conflict. Bad mistake! I was scratched and bitten very badly over my right hand and arm. The nurse at the hospital thought it was funny that my own cat had done that to me!

If cat behavior problems is an issue in your household, a few strategically placed spray bottles to squirt the combatants with, a whistle, a soft pillow or maybe even favorite toys can be used as a distraction. That short interval may be all that’s needed to break up an entanglement that could quickly escalate into serious injury to one or both cats.

These words are not meant to disturb you or put you off from enjoying the company of a cat or cats in your life. Healthy cats live long lives, well beyond 15 years in many cases. As an example my daughter’s cat Sam is 19 and is still very agile for his age. Cats make great companions and a few cats in the house can be fun and fascinating to watch as the hierarchy of the group develops. Cats are like potato chips, you usually can’t have just one. There are just certain situations, as mentioned above, where a little thought, preparation and planning are in order to keep a healthy, happy cat house. If you like this article please share it with your cat lover friends.

10 thoughts on “Cat to Cat Aggression. When are Cats Playing or Fighting”